During the month of October St. Peter’s is running the Always Being Made New-World Hunger campaign. You may know about hunger needs, but do you know all that the ELCA does to create change?

Through its World Hunger ministries the Evangelical Lutheran Church of America engages in long-lasting change where families and communities are given the resources they need to live and thrive. 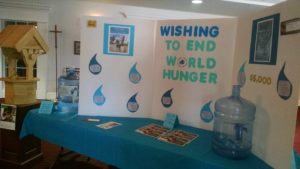 During our Always Being Made New-World Hunger campaign we have specifically focused on water initiatives. Many women around the world have to walk over three miles carrying 40 pounds of water to ensure that their families have safe water for drinking and cooking. These past few weeks your rostered leaders carrying a 40 pound jug of water during the announcements at the beginning of each worship service as a visual sign of our campaign. You may have noticed that they struggle to keep carrying the 40 pound water jug (and they’re are only doing so for 5 minutes). Imagine a woman or child carrying this amount of water over rough terrain and under the hot sun. Your gifts can help create water wells that will transform an entire village from struggling to thriving.

Check out this video to learn more about the water initiative:

Taste of the World Meal

The campaign concludes with a Taste of the World meal on Sunday October 16 at noon in the Family Life Center. The meal will feature good old American Hot dogs and fixin’s, potato chips, and drinks – you will also get a taste of food from each country that is represented. Kids will have a “passport” activity and a craft to do. Tickets to this event are on sale in the Narthex following the 8am Traditional service and before and after the 10:45am Traditional service as well as before and after the New Day Praise service. Cost is $10.00 for ages 13+, $5.00 for ages 5-12 and 4 and under are free. (Maximum charge per family will be $30) Tickets purchased in advance would be appreciated to enable us to prepare enough food. Tickets will be on sale at the door as well.

You can be part of the long-lasting impact that changes lives. You can answer God’s call to be a blessing to others. We hope that you can give to the Always Being Made New-World Hunger Campaign!

Pastor Sarah served as Pastor of Christian Formation at St. Peter’s from 2014 – 2021. She now serves the wider church as a partner at Kirby-Smith Associates.