After crossing over the water, Jesus stepped out of the boat, and was met by a man full of demons. They shouted at him, and their name was Legion.

Now there’s a bad start to your day, accosted by a naked demon possessed man named Legion. Legion is a military word for thousands of soldiers, and these were thousands of demons waring against the soul of this man.

We don’t know exactly what kind of demons possessed this man, but they were so destructive that the townspeople had to put him in chains to control him.
And the voice of the demons replaced the man’s own voice, as he lived as an outcast in the tombs, the place of death, outside of the town, naked and friendless.

It’s hard to know if these demons were evil spirits, or some mental disease that was unexplained in the first century. But I don’t think that is necessarily important for us today,
Because it seems that we all find ourselves overwhelmed at times by demons of all kinds—
demons that can leave us feeling, like the demoniac, naked & vulnerable, voiceless and alone.

Pr Nadia Boltz Weber calls our demons twisted things–those twisted things that drown out God’s voice to us, the negative voices that we all struggle with, -those things that keep coming back at us, especially when we are tired, discouraged, or overwhelmed.

They could be hurtful words that we heard many years ago, an identity that was placed on us, has continued to define us, and for some reason, we keep rehearsing it to ourselves: you are just not good enough, not smart enough, no one likes you. You are a loser, worthless, deviant, a failure. And the demon voices steal our voice, the voice God gave us when we were named “Child of God”—God’s voice in us of love, acceptance, and hope

Jesus commanded the evil spirits to come out of the man. But the Greek word translated as “commanded,” also can mean “had started to command,” which makes more sense in this story. Why else would the spirits be so upset and confront Jesus? But this commanding is not past action, not once and done. It is continual, ongoing action that started in the past, continues into the present and into the future. Jesus continued to command the spirits to come out of the man.

And it’s important for us to know that Jesus continues to cast out demons that define us today, that the work isn’t over yet.

But most of us will acknowledge that when our negative demon words define us more that God’s words, we can sink into self-pity, maybe even self-loathing so much that it becomes a normal, a comfortable place for us. It’s familiar there and doesn’t demand much from us.

I wonder if that is what was going on with the townspeople in this story. When they saw that the man was healed, clothed, and sitting at Jesus feet, they weren’t glad for this guy, saying, “This is fabulous! We are so happy for you?” No, they were afraid. Why? Were they somehow afraid of Jesus power, afraid they would lose more livestock? Perhaps they were afraid of what such a power might mean in their own lives, afraid that they might have to change something, move out of their comfortable place of familiarity, or their belief that they could control the demons –even cast them onto a man already filled with legions of them.

Do we too are tempted to cast our own demons on others, point our fingers at them. Somehow, if other people are worse than me, I can feel better – all of the evil in the world is because of who they are, what they are saying, what they are doing – and no one will notice the evil in me?

In the wake of the news coming out of Orlando, it has been a rough week, and I know I have found myself almost numb, searching for my own voice, not knowing how to respond. The sadness and powerlessness can be overwhelming.

What should I say? Should I talk about Orlando in my last sermon at St. Peter’s? Do I post something on Facebook? Will I be misunderstood? Will I be eloquent enough? What will people think about what I say or don’t say? I don’t think of myself as an activist, but this week there are too many demon voices speaking hate, too many politicians, clergy,& legislators, pointing fingers, desperate to blame someone else, to erect barriers of hate. I too want to blame someone else.

So you and I must ask ourselves, Will we remain voiceless in the midst of all of this.

One day Jesus crossed a sea, the watery racial boundary between Jewish Galilee and the Gentile world, to rescue the demonic—

This was not the first time Jesus crossed boundaries. The New Testament is full of stories of Jesus stepping over the line—the ultimate as Jesus crossed the barrier between heaven and earth to step into this world, and into a tomb of death, and was raised for our rescue.

And called into baptism, we too cross a watery boundary from death to life, and by God’s active Word and water are named child of God. And it is God’s active Word that continues to speak life into us, casting out the twisted demon things in our lives & our world, not once, but over and over again.

And as demon infused pigs drowned in the Sea of Galilee, our demons too continue to be drowned. They are drowned when experience God’s active voice of healing & renewal for us in worship. When we affirm the faith to God & one another in hymns and creeds, when the pastor declares God’s forgiveness to us in confession and absolution, when we hear the life giving words of Scripture and gospel preaching, when we become God’s children in Baptism and affirm our own adoption into God’s family, renouncing the forces that defy God, and as we receive God’s own self in bread and wine.

Last Week, mothers and fathers, friends & family, waited in agony for news, waited to know if their loved ones were inside, entombed in Orland’s Pulse nightclub. And in the midst of a media onslaught of hateful finger pointing, God’s active voice stepped over all kinds of boundaries with the compassionate words and actions of some churches, airlines, restaurants, who offered water, food, prayers, consolation, funerals and counsel.

Just yesterday, we got an email from a friend who lives in Germany. She and her husband were leading small groups of 8th graders on walking tours of important Jewish sites in their community. She wrote:

Within easy walking distance of our home and about 200 yards behind our main train station, is a ramp that connects the wall of an old slaughter house to the train tracks. Yeah. You know what happened here. In plain sight.

What we were so vividly reminded of today is that unspeakable evil can grow from deceptively small, seemingly inconsequential hate. It can thrive in the space left by good people who say nothing. And it can spread with mind-boggling speed.

When you encounter small hate, please don’t say nothing. Even if it’s uncomfortable, please at least say something small. “I don’t agree with you.” “I don’t accept that.” Please don’t leave the space that can allow the hate to grow.

Brothers and sisters, you are God’s rescued beloved child, and we have God’s own voice within us. It is a voice of love and compassion, with the power to break down barriers of fear and hate. 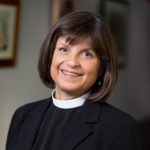 Karen was installed as Pastor of Trinity Lutheran Church, Mechanicsburg in 2017.