“Greater love has no one than this, that someone lay down his life for his friends.”

It began with an old, weathered, wooden HONOR ROLL that had been kept in storage for over seventy years! Names, many names, some familiar, but most were unfamiliar. These were the names of church members or Sunday School members who served during World War II. 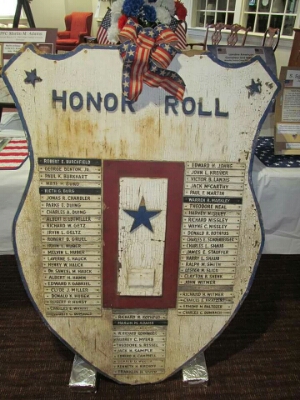 All of them were part of our St. Peter’s extended church family.  Five of those names were prominently listed at the top.  They were the ones who paid the ultimate sacrifice. They had a future. They had dreams. They had families who wanted to keep loving them.

Thanks to the internet and websites such as “Find a Grave” it is now possible to do research from the comfort of your own home.  As I started to uncover more and more information, I began feeling a close connection to these five people.  I thought about their families and wondered how and when they received the dreaded news about their loved one.  Some stories really tugged at my heart strings. Especially Farry & Lettie Herr who are interred in our church cemetery. They buried four infant children. Their fifth and youngest child, Jay Robert, lived to adulthood, but was killed in action in Germany in 1944. He is buried in Belgium. How did this family overcome such insurmountable grief? I have no doubt that their church family loved and supported them. I felt compelled to visit their gravesite and I said a prayer for them. Somehow, I felt I knew the Herr family because I knew their story.

Today, May 30th, we mark the 148th anniversary of the first official observation of the holiday we now call Memorial Day, as established by General John A. Logan’s “General Order No. 11″ of the Grand Army of the Republic dated 5 May, 1868. This order reads in part: “The 30th day of May 1868 is designated for the purpose of strewing with flowers and otherwise decorating the graves of comrades who died in defense of their country during the late rebellion, and whose bodies lie in almost every city, village and hamlet churchyard in the land.” Logan’s order in fact ratified a practice that was already widespread, both in the North and the South, in the years immediately following the Civil War.

Waving a flag or observing a moment of silence on this “Day of Decoration” does not imply support for every American conflict, both foreign and domestic.   Memorial Day is a time set aside each year for reflection upon the greatest gift that another could ever give – his or her life. Thank you to everyone who has served and those who are serving us through our military and our country. AMEN. 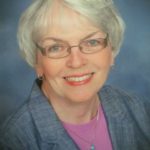 Serving as chair of the Archives Committee has been a perfect fit for me. I have always had an interest in history so it has been my great pleasure to share “our story” with the people of St. Peter’s and other interested persons.